Ravi Mehta, co-founder and CEO of Scale Higher, shares his thoughts on the antifragile company framework and what makes a company grow during difficult times. 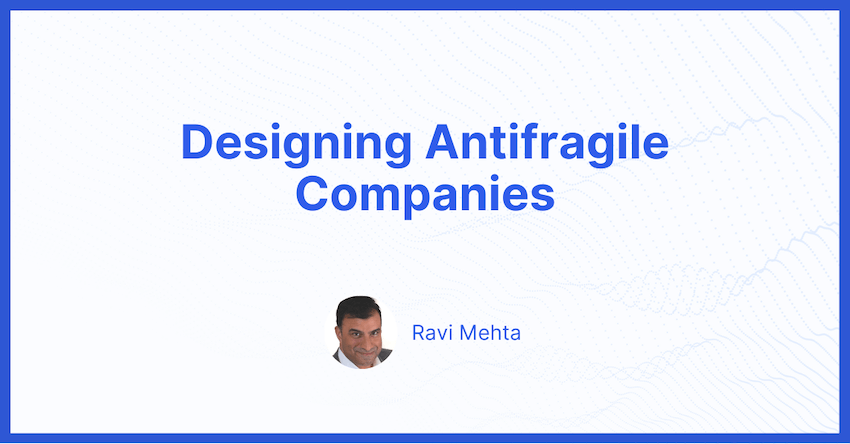 Ravi Mehta is the co-founder and CEO of Scale Higher, a coaching organization that is reinventing the way that people learn and grow. Prior to launching Scale Higher, Ravi served as Chief Product Officer at Tinder, Product Director at Facebook, and VP of Consumer Product at TripAdvisor. In this article, Ravi shares his thoughts on the antifragile company framework as well as how he plans to apply the framework to his new venture.

What does it mean to be an antifragile company?

Ravi: When the pandemic was in full swing and things were locked down; I was fascinated by companies that responded in really adaptive, agile, and inventive ways, while others were caught on their heels. This reminded me a lot of Nassim Taleb’s idea of antifragility.

To understand antifragility, you have to differentiate it from resilience. There are things that everyone understands to be fragile, like glass. If you tap on glass hard enough, it’s going to shatter and be unrepairable. Then there are things that are resilient, like rubber. If you tap on rubber, it won’t break. It’ll keep bouncing back into shape.

But resilience is not actually the opposite of fragility, it's more like antifragility: the idea that you aren’t just resilient in the presence of shocks but that shocks help you get stronger. Muscles are antifragile. Every time they’re pushed to their limit, they grow back stronger and stronger.

Companies that are not antifragile manage their operations in a way where they have very little slack in the system. Small interruptions can have a pretty massive impact on their bottom line and can even drive them into bankruptcy.

During COVID, we saw companies that were antifragile, because they prioritized capacity over minimizing slack. A couple of examples come to mind: Amazon, of course, did a fantastic job of responding to a massive increase in demand.

What are other examples of antifragile companies?

Ravi: Antifragile companies are both diversified and synergistic. A perfect example is Disney.

Over fifty years ago, Walt Disney created a synergy map where he mapped out all the different pieces of the business and how they relate to and reinforce each other: IP creation, theme parks, movies, toys, etc. That exact same synergy map is still how Disney runs today. During the pandemic, their diversification played to their benefit when they had to close their parks and lean on their growing streaming business and IP holdings.

Being diversified enabled them to have multiple irons in the fire when they dealt with the different shocks they were experiencing. Their intellectual property was key to their survival. People grew more familiar with properties like Marvel and Star Wars and others on Disney+ during the pandemic which then created greater demand for the parks when they reopened. Old fans wanted to return, and new fans wanted to go and experience these characters in real life. I think Disney is one of the best examples of an antifragile company that embodies both diversification and synergy.

Another example is Roblox. Some people might think of Roblox as a game, but it’s more of a game platform that enables creators to make content. The increased demand during COVID ended up making the whole pie bigger for the game creators on the platform. Therefore, in addition to seeing a lot more people playing Roblox, you saw a lot of innovation and creativity and expansion on the supply side and the game side. During COVID, Roblox grew stronger and essentially turned into the new playground for kids.

My kids are ten and twelve years old, and what I saw was that they were getting off school and jumping onto Roblox. There were a number of things about Roblox that made it such a powerful place for kids, including the fact that there wasn’t a prescriptive way in which they needed to socialize on it. You had kids in groups of twenty playing together, kids playing solo, kids playing in groups of two or three. And so it really did have that playground atmosphere to it.

How are you thinking about strategy at Scale Higher, and how does antifragility tie in?

Ravi: At Scale Higher, we want to democratize access to professional coaching and bring its benefits to a much wider set of people. For myself, having an executive coach was something I found incredibly powerful in helping me grow in my career, but it’s just not accessible to the majority of the working population.

We saw this as a really interesting problem in terms of scope and demand but we didn’t know if it was actually possible to scale coaching. We’re learning a lot from companies like Headspace, Calm, Talkspace, Noom, and Future in terms of how they reimagine the relationship between a person and a one-on-one provider, like a fitness coach or a therapist. There’s a really interesting opportunity here to take something where we know there is a lot of demand and think about how to reinvent in terms of what’s possible with mobile experiences.

I’m thinking about how to build a company that’s diversified and synergistic. We’re in the early stages of laying out our strategy and we’re thinking a lot about how to create that diversity as well as make sure the coaches and content on our platform are synergistic and facilitate a long term relationship with the user.

Part of that is going to be empathy with the user, and understanding their needs. I think with today’s emphasis on metrics and hitting goals it’s really easy to lose sight of relationships with your core team, stakeholders, and users.

Related Articles:
Founders
How To Build a Minimum Viable Company

Emil Michael is the former Chief Business Officer at Uber. Emil shares M&A lessons from Uber during their hypergrowth phase. You can check out our Execs episode with Emil here.