Ravi Mehta, co-founder and CEO of Scale Higher, shares his experiences in the consumer industry and as a first time founder, as well as his vision for the future of the consumer product industry. 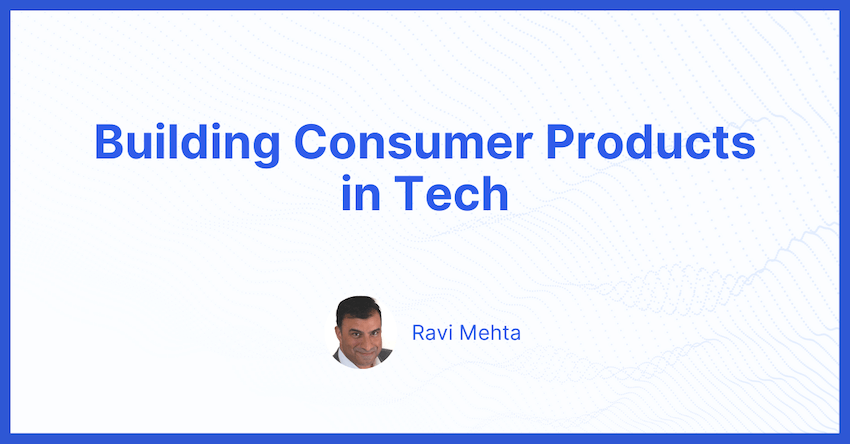 Ravi Mehta is the co-founder and CEO of Scale Higher, a coaching organization that is reinventing the way that people learn and grow. Prior to launching Scale Higher, Ravi served as Chief Product Officer at Tinder, Product Director at Facebook, and VP of Consumer Product at TripAdvisor. In this article, Ravi shares his experiences in the consumer industry and as a new founder with Scale Higher, as well as where he thinks the future of consumer products is headed.

Ravi: I started early in tech. In the late ‘80s to mid ‘90s, my dad brought a computer home, and I just fell in love with technology’s ability to change individual people’s lives and the way it can bring people together. The main throughline in my career has really been a focus on the consumer. I’ve worked in a lot of domains — I’ve worked in travel, I’ve worked in gaming, I’ve worked in social and dating — but I’ve been passionate the entire time about consumer products. In particular, most of the consumer products that I’ve worked with have some way in which they’re connecting people together, either very directly, like Tinder or Facebook, or in more indirect ways, like TripAdvisor.

Do you have a favorite space when it comes to consumer products?

Ravi: I get excited about a lot of different spaces. I had never used Tinder before I worked there. I’ve been married for a long time, but I found it really fascinating to think about how people discover each other and how they connect. One of the things we spent a lot of time on at Tinder was thinking about Gen Z. Where are dating and social discovery going for the next generation, given that they’ve grown up with social technology embedded into their lives?

The ability to connect and talk to someone before meeting in person didn’t exist in prior generations. Now, people are doing it ubiquitously. Therefore, the question is: how do you enable people to discover other people and have meaningful conversations? Despite not having personal experience with dating apps, it was a problem that I got really excited about.

As I consider the span of my career, I can’t think of any problems that are done. The very first thing I worked on was gaming, and there I was also thinking about how people can connect with each other. I also worked with Brian Balfour, who is now the CEO of Reforge, at his first company, which was focused on microtransactions and virtual goods.

Back then we were thinking about real estate and other things, and now the conversation is happening in terms of NFTs. These spaces are continuing to evolve; we’re starting to see really interesting rhythms in technology.

VR is a great example. It’s come and gone multiple times now, and it hasn’t yet hit its stride. However, I think we’re at an inflection point for at least some applications of it. It’s an interesting question that I haven’t thought about a lot; I don’t think any spaces or modes of technology are fully played out yet.

Even in spaces like eCommerce which have received so much energy and emphasis, it’s been exciting to see what has happened with Shopify, Popshop Live, and some of the other innovations around live streaming. A lot of doors are wide open.

What strategy are you planning to apply at Scale Higher?

Ravi: We’ve evolved the strategy over time. One of the things we wanted to do was not jump in right away and assume that we were right. I’ve seen this so often with startups; they’ll have an initial idea of what the solution looks like in their space and there's a lot of pressure to double down on that direction. You raise money and you have investors that are expecting results, so there’s this pressure to grow before you’re ready — sometimes in the wrong direction. In order to avoid that, we started with the idea that we wanted to fall in love with the problem — how do we make coaching more accessible? — and not be so tied to a particular solution.

Our initial product discovery work was all done with no-code tools where we could work really quickly, be agile, and try different things. Our initial hypothesis was that we could create something like Talkspace or BetterHelp and make coaching more accessible through a text- or message-based coaching product.

We rolled it out to a handful of users and found that people were having really interesting conversations but retention wasn’t great. When we tried to monetize, we got some people to convert but we were seeing high churn rates.

What we found was that people just weren’t used to having a coach via messaging. Users didn’t always know what to talk about and they didn’t have the habits built up around how to actually engage with a coach.

We learned from that and created the current iteration of the product, which is guided sprints that combine structured learning and exercises with one-on-one coaching. These sprints provide a lot more structure to both the coach and the member, and create a shorter path to leveling up the user in their chosen area. We found much better retention and monetization with this dynamic, so that’s the direction we’re now doubling down on.

How do you think coaching will help the tech industry in particular?

Ravi: Mentorship is really important for our industry, and not just between people at the same company. We need to start with people when they’re in high school or college and thinking about where they want to go with their careers, how they want to invest in themselves. From a diversity perspective, one of the problems that people talk about is the pipeline problem: there’s just not enough people coming into tech, and you don’t always have enough candidates to choose from if you want to hire someone from a diverse background.

Maybe the pipeline problem is not as pronounced as people think. Maybe we just don’t have enough candidates across the board. There are people out there that want to get into the tech industry, but they don’t know how and they don’t have the tools to be able to figure out how to get their first tech role.

TripAdvisor had a great product rotation program, and we were able to get at least a 50/50 ratio between male and female product managers. The rotational program helped us get a really diverse set of candidates because we weren’t necessarily looking for past experience. The problem when you look at general experience rather than raw talent is that biases can get reinforced.

It’s difficult to find someone who has exactly the right experience and who is also diverse because of societal inequities that compound on one another. Companies that have the resources to do so should find raw talent first and use something like coaching to focus on teaching, development, and mentorship.

How do you plan to make coaching available to a wider audience?

In the currency space, this looks like U.S. dollars, payment systems like PayPal, then digitally native currencies like Bitcoin. In the health space, you have face-to-fact visits with a doctor, and finally Teladoc and other virtual services. Companies are rethinking these spaces, adding in messaging, adding in productization by deconstructing the service into its component parts in order to rebuild it.

This is how we’re trying to think about coaching. Analog coaching has always worked well but it’s expensive, hard to find, and not accessible to people looking to get into tech. What does digitally native coaching look like? How do we rethink that core coaching interaction, deconstruct it, and build a product around those parts so a coaching session doesn’t have to be a 45-60 minute call?

We want to build things into the product where people can learn and practice and get feedback via messaging and video. All of this will come together to create a new type of coaching interaction that is both more scalable and more effective.

Given your experience, what would you do differently if you were starting a dating or travel company today?

Ravi: The first thing that I would consider is platform changes. We had the PC era, the web era, and then the mobile era, but there’s a platform change that nobody is talking about, and that is the shift to video. Almost every single mobile app has been disrupted by video, but that still hasn’t happened to dating. Some have added video components as a result of the pandemic, but there is still no video-native dating experience that looks and feels more like TikTok than Tinder.

There are also a lot of entertainment and gamification concepts that are coming into play with messaging. I think we’re going to see the addition of gaming, virtual goods, filters, and potentially AR into the communication portion of dating to make it more immersive and experiential. We’ll eventually get into the metaverse with dating, but I think that’s farther out than people think.

I also feel like there hasn’t been enough innovation in travel. Companies like Expedia and Booking.com have built extraordinarily large businesses on top of the transaction; they’ve ceded the discovery, planning, and entertainment side of travel to Google, Instagram, TripAdvisor, Pinterest, and other companies. I don’t think there’s a great experiential, video-native travel company geared towards Gen Z and Millennials.

There are some really interesting influencers that are creating great travel content, but it hasn’t really come together yet into a nicely tailored, productized experience. This is an area where I think Web 3.0 might come into play. I could absolutely see someone creating a video-centric travel discovery platform and combining that with location-centric NFTs and other ways that people can create, engage, and share content about places they visit. I think there’s going to be a lot of innovation there.

In this essay, Patrick Rivera, product engineer at Mirror.xyz, explains why web3 represents not just a slight iteration on existing products but the birth of the world’s first global internet-native economy, and what this tells us about the real significance of web3.

David Hoang, Head of Product Design at Webflow, ran an AMA in On Deck Design. Here's the recap.