How To Cultivate Talent in Young Entrepreneurs

Tyler Cowen, director of the fellowship program Emergent Ventures, shares his thoughts on how to identify and cultivate young entrepreneurial talent. 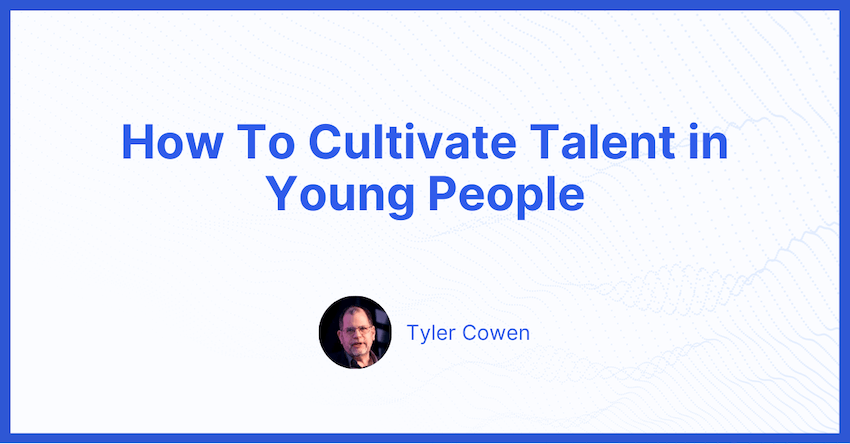 Tyler Cowen is an economist, author, and professor at George Mason University, where he serves as general director of the Mercatus Center and its grant program, Emergent Ventures. His work with Emergent Ventures seeks to fund entrepreneurs with innovative ideas for improving society. In this Q&A, Tyler discusses how to spot and cultivate young talent. This is an abridged summary of Tyler’s interview on Execs, our podcast where we interview executives from high-growth companies.

How can we cultivate talent in the young people around us?

Tyler: I think what you can do is let them meet some top people and get a sense of their role models. You could fly them to some excellent conference or other assemblage of young talent and let them learn from others.

This is some common advice I give to parents: at some point, your kid is going to stop listening to you, and they’re going to be looking for someone else to listen to. Bring over your friends or get them in front of whoever can be a positive role model at that age and beyond.

Your real impact is in who else you’re exposing your children to. Also, remember that you can be useful to people without giving them advice, which isn’t always taken well by young people. The best form of “advice” you can give is just to try to better yourself and keep growing.

How do you evaluate young talent?

Tyler: I think it’s important to look at the groups that a person is embedded in and who they look for approbation from. If you’re young, maybe you’re a bit insecure and approval from things like social media or a local gang might feel good at the moment, but for an awful lot of young people, these are the wrong tracks to be on.

When I’m talking to people, I like to ask: who is your group of peers? Who do you get inspiration from? Where do you fit into that group? Are you the leader?

It’s not that I always want to support the leader, but it’s a question that people find very hard to flat-out lie about. You get a lot of hums and haws, but the person will ultimately let on that they’re not the leader of their group. For some projects, that may be fine or even preferred, but it’s something you want to know.

I also try to see if the person can see the broader picture. Often, teenagers aren’t thinking more than three-to-five years ahead. At that point, they might no longer be interested in a given venture or career path.

Let’s say someone is seventeen years old and they want to create a $10 million startup. That’s pretty great. But if that’s their only ambition in life, then maybe that’s not so great. But if they see it as a stepping stone to a longer-term career, I can see that they understand the broader picture.

Look at the Collison brothers. Patrick and John Collison co-founded their first company when they were nineteen and seventeen years old, respectively. They sold that company and went on to found Stripe three years later.

A person’s ability to see the stepping stones in their career growth is something you can scout for when you’re evaluating talent.

How do you think early success affects a person’s career later on?

Tyler: I think about this quite a lot: whether fame breeds risk aversion. I think of cases like Mozart, who was famous in Austria when he was really quite young. People expected great things from him, but he still did just great. Chess grandmaster Magnus Carlsen was also very famous as a young teenager and kept up his success.

I’m not convinced that fame causes people to be more risk averse. I feel like the very best people will fight their way through that. It’s almost another challenge to overcome.

That being said, I think social media and mediums like Twitter can be energy drains. It’s a sign you’re fishing in another pond and looking for approval and success in the wrong places. For sure, if someone wants to be the next Matt Yglesias and make a career out of that, that’s great, but that has to be the plan. If you’re using social media as a way to avoid doing something else, I see that as choosing a short-term distraction and reward system to avoid confronting real obstacles.

Emergent Ventures has funded many people in their teens and early twenties — why do you think that is?

Tyler: Emergent Ventures is open to everyone, but it’s true that we’ve ended up funding a lot of people in that age category. People at that age are capable of great things. Even earlier in history, look at the ages of the Founding Fathers. They weren’t sixteen years old, but an awful lot of them were in their twenties and had been thinking deep thoughts before then.

There are plenty of areas such as sports where people who are quite young run and lead teams. Even if they’re not the coaches, they do a phenomenal job. You see this kind of young leadership in the military, too. There are a lot of startups created by young people which take off and do very well.

As a society, we just haven’t internalized this lesson yet. It sounds crazy to say that young talent is undervalued, but I think it is, and massively so.

What kind of role does culture play in talent development?

Tyler: I think culture does play a role, up to a point. Look at Elon Musk. From what I’ve read and heard, it seems to be quite important that he came from South Africa. That bred in him some sense of urgency. He also had early exposure to people like Peter Thield, Reid Hoffman, and other truly top performers and talent evaluators.

There are cultures that cut down the tall poppies, but entrepreneurship still thrives there. Some people give New Zealand as an example of that, but look at the director Peter Jackson. Or look at Stephen Jennings, who went to Moscow and started Renaissance Capital.

So there’s not one single model that works. We need to keep an open mind because now is the time to be solving vast social problems. We’re missing a lot of talent because not everyone in every country is going to get the chance that Elon got.