How to Lead a Growth Team in a Hypergrowth Company

In this Q&A, Morgan Brown (Shopify, ex-Facebook) shares his thoughts on how to successfully operate in the hypergrowth phase as the leader of a growth function. 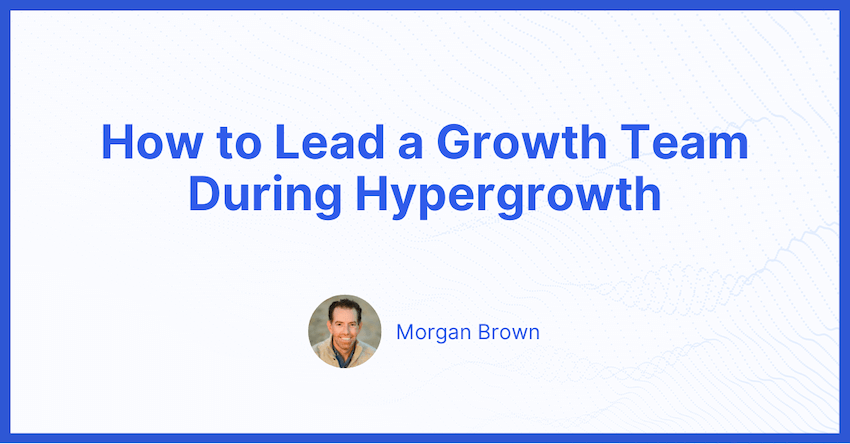 Morgan Brown is the VP of Growth at Shopify. He was previously Director of Product Management at Facebook and Chief Operating Officer of Inman News. In this Q&A, Morgan shares his thoughts on how to successfully operate in the hypergrowth phase as the leader of a growth function. This article is an abridged summary from his interview on Execs, our podcast where we interview executives from high-growth companies.

How do you navigate the hypergrowth phase at a startup?

Morgan: You have to continue to communicate about why you’re doing what you're doing, why it's important, where you're heading. There's a lot of change, a lot of teams being reorganized, a lot of existing systems and capabilities just hitting their breaking point that have to be rebuilt.

Different tactics and programs work and don't work at different stages of a startup. You need to be comfortable with change. It's actually one of Shopify's core values: to embrace change. Toby Lutke (the founder of Shopify), talks a lot about antifragility as a key principle. Antifragile is on the reading list here for everyone at Shopify.

Embracing that sentiment is an advantage. Identifying where we're headed, then making sure everyone knows that and why. What are the milestones to get there? And then, to use a Jim Collins phrase, “getting the right people in the right seats on the bus.”

The thing I personally had to learn the most was just patience. You want to go fast. You want to say things once and keep moving. But some things just take time and take repetition. You're not going to get things right every time.

It is going to be a bit messy, so if you can keep everyone understanding what the north star is, why you're going, where you're going, you can make up for a lot of that along the way.

When you're in the midst of it, there is an instinct that feels like "Hey, we have to go now! We can't wait."  But the lesson there is to spend more time upfront.

Andrew Bosworth from Facebook says communication is the job. And I think often if you say something once or twice, you feel like the job is done, but that's really not the case, especially in hypergrowth. And so it’s worth the time to be a bit more intentional.

What have you learned about experimentation in your time at Facebook and Shopify?

Morgan: Coming from my biology background, a hypothesis-led approach is how I try to understand the world. Experimentation is a huge part of that.

Alex Schultz, the CMO of Facebook, has a famous saying: "The companies that learn the fastest, grow the fastest."

Facebook is known for running thousands and thousands of experiments at any given time. What gets shipped at Facebook comes down to understanding the impact of the experiments, which is heavily based on metrics and user research.

When I got to Shopify, the team was running some experiments, but not a ton. That was the result of just bandwidth. There wasn't really a lot of engineering or data science capability in the growth team when I arrived.

So we focused on fixing that ability to execute, then embracing experimentation as a way to understand what matters most to the people that are discovering and using Shopify.

How do you successfully run experiments when you are in hypergrowth?

Morgan: The idea with experimentation, especially in a fast-paced environment, shouldn’t just be: throw a bunch of stuff against the wall and see what sticks.

For example, some of the experimentation opportunities at Shopify was to look at our customer acquisition side. Like many companies, we have a pretty healthy paid advertising budget and a lot of it goes to digital advertising. So, when it comes to paid media spend, one of the best ways that you can improve that part of the growth loop is by giving the ad platforms better data to help you target the right type of customers.

We started testing sending different signals to ad platforms, then finding which ones led to higher conversion rates and higher-quality customers. It started working, so we started scaling that from very small campaigns, to shipping that to the entire platform, to testing it across additional platforms, finally resulting in building the technical infrastructure to do that repeatedly at scale.

The key here to impact here was not to test things piecemeal, like, "Hey, we're going to A/B test this and A/B test that," but starting from a very strong hypothesis about how we can improve our audience targeting.

That kept us focused and gave us the momentum to work systematically through experimentation to scale it to greater and greater impact.

Related Articles:
Guides
How To Hire Your First VP of Growth (and other A+ Growth Talent)

Morgan Brown is the VP of Growth at Shopify. He was previously Director of Product Management at Facebook and Chief Operating Officer of Inman News.. In this Q&A, Morgan shares insights on hiring growth talent. This article is an abridged summary from his interview on our Execs podcast.

This is an AMA recap from On Deck Marketing. Timo Pelz, VP Business Marketing at Reddit, is a full stack, generalist marketer with global experience. Previously, Timo built business marketing teams at Facebook and Instagram.