How to Successfully Hire Executive Talent 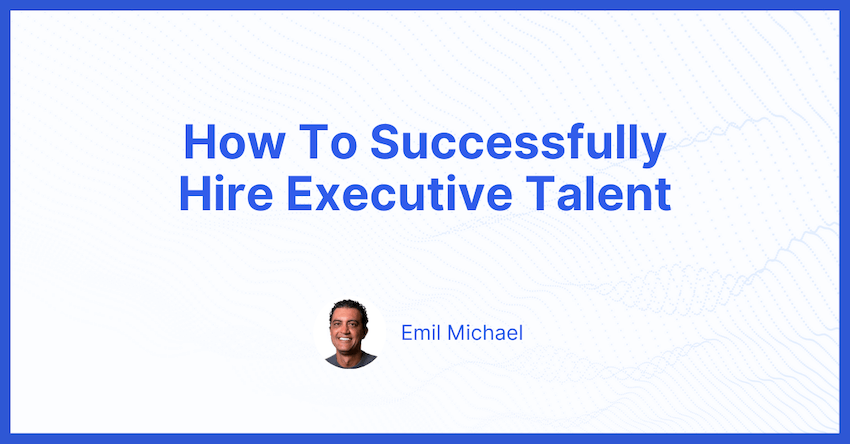 Emil Michael is the former Chief Business Officer at Uber. In this abridged summary, Emil shares how to discuss how to successfully hire executive talent. You can check out our Execs episode with Emil here.

Q: What advice do you have on exec hiring in general?

Emil:  No one wants to believe this, but 50% of exec hires at a high-growth company fail. No matter how hard you work at it, no matter how much you interview, it's just how it is.

It’s either the senior exec isn’t ready for how chaotic startups are, or the company isn’t ready for the level of formality, bureaucracy and process that an executive hire brings. There are many other reasons why you should assume a high failure rate.

Therefore, my best answer is to try to speed up the process. You know you're not going to get it perfectly right on both sides. And obviously, if something doesn't work out, you should be willing to cut it faster.

Additionally, with execs, there are a lot who are doing it for the wrong reasons. They see a lot of money being made by younger people. They might not say it outright, but you know that's what they're trying to do. This rarely works out.

Now, the person who's gone through tech companies before and has actually seen the chaos of a startup –  and now they just happened to be senior – they’ll get it.

Their muscle memory is still there. They can adapt to any given situation. They're more likely to think, “Yeah, I'm going to get into this. I remember being in shit shows before. This could be a bigger shit show than I remember.”

Generally, you should test for several things when making exec hires.

Test for motivation, test for flexibility, test for their willingness to learn a new playbook.

It’s important for you to also test that they won’t just bring all their buddies or gals and friends from their company to drop them in here.

Are they willing to come in with nobody and hire all new people? Will they manage the people you hire? How flexible are they really? Ask them how they built their org. If their go-to answer is that they'd go to the people that had worked for them at a previous company, that's a red flag.

Q: If 50% of executive hires don’t work out, one might consider work trials. This raises  the question of "if they're on trial, is that a real trial?" You can’t have a fake CTO or COO or something. They need to have the title. What do you think of trials?

Emil: Trials don't work at the most senior levels. People can't actually unplug from whatever they're doing to do something temporary. They're probably older. They probably have families or some deeper connections. The trial will never work because they're half in, half out.

The other flag I've learned over the years is when an exec is unwilling to move to headquarters.  They're thinking, "I'm going to get an apartment, and after a year, I’ll move." This rarely works because they haven't emotionally committed to the place or to the mission.

They may not be intentionally thinking this, but that’s what it says, because you have one foot out the door. Execs will often say, "oh the kids are in school. When they're done in June, I'll move." That's a red flag that an executive isn't a good fit.

Emil: It's a tough question. You can’t disempower your exec hire by making it seem like they may not be there in a year. You have to be all in because if you're not all in then, the people who they inherit won't be all in.

Q: Do you have any advice on how to close executive hires?

Emil: The key to closing execs is that you've got to show effort and commitment. Sometimes that means flying to where they are and meeting them in their space to get extra time with them that you wouldn't get if you're waiting for them to come to you. It shows that you're interested. It matters a lot to these people because they're probably in a stage of their career where they have options, because they've been around a bit if you want them to be an exec, right?

Second, it is true that you're more likely to get someone in a relationship or has a family at that stage. This means they’re making a more collective decision versus a single person who just graduated from college.

You need to understand those dynamics. And ask about those dynamics. Do you have supportive family members? Or are they worried? It can get a little uncomfortable that you have to go there sometimes, but people are pretty open with that if you actually genuinely are like, "look, I want you to be happy because this is a consuming job, and you need the support of people around you.”

Emil Michael is the former Chief Business Officer at Uber. Emil shares M&A lessons from Uber during their hypergrowth phase. You can check out our Execs episode with Emil here.

As a first-time founder, how do you go about building a great executive team? In this interview summary, Jared Fliesler shares tactics for effective executive recruitment drawn from his 15 years of former experience as COO at Scribd, VP at Square, director at Google, and GM at Slide.