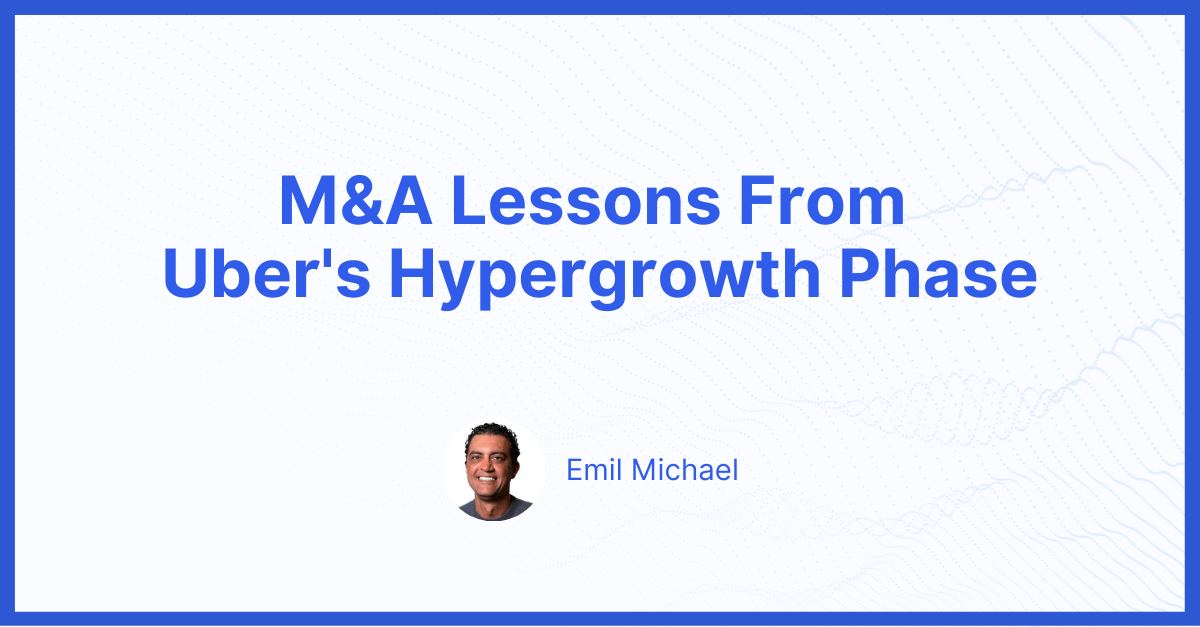 Emil Michael is the former Chief Business Officer at Uber. In this article, Emil shares M&A lessons from Uber during their hypergrowth phase. You can check out our Execs episode with Emil here.

What makes M&A so hard? What did you see at Uber?

Emil: M&A and buying companies is tricky when it’s two private companies involved, because everyone's valuation is dependent on their last round. If you’re not paying in cash, the argument of who's worth what is always in the background.

So, if it’s a strong company buying another strong private company, it's really hard. You just have to accept that the success rate of actually closing a deal is really low. But that doesn't mean you shouldn't try.

At Uber, we tried to merge with Lyft many times, because it just made so much sense. But the relative value argument dominated the conversation. I wish we could have figured it out.

However, even if you resolve that, there are still many more issues to resolve. For one, you have to decide what you want out of that company. Do you want the leadership to transition after two years, or do you want them to be part of the effort for the next foreseeable future? You need to be realistic here, then consider all the downstream effects. For example, an entrepreneur who you've acquired will usually not want to be a non-entrepreneur at your company; and sorting out what’s expected from them sends a message to the company and employees you're acquiring.

Another thing that makes M&A difficult is that nobody evaluates their track record. Corp dev buys a company and then forgets about it. No one ever goes back and says, why did that happen? What would we do differently?

You need to have a way of checking in and seeing if your acquisitions have been successful. The best corp dev guys and gals think about that a lot. During the acquisition process, they plan for what this company's going to look like in two or three years, then determine whether it still makes sense. A little bit FP&A inside of M&A is really useful, but you rarely see this happen.

What are your thoughts on mergers between direct competitors in tech?

‍Emil: I generally think there's under-consolidation in private tech for too long. And I'm biased by the Uber/Lyft experience, where the subsidy wars continued for so much longer than they should have. Everyone lost at the end of the day.

The subsidy war meant that the market for riders wasn't quite market-driven. You didn't really know what was real and what wasn't. This took a long time to correct. Uber is going through this now, so we are finally discovering what users are actually willing to pay and learning what drivers need to make this whole system work.

It's so hard to emotionally get over the idea of acquiring and merging with a direct competitor, but I think companies need to do this more. And they should do this earlier. It typically makes more sense today because the biggest businesses have multiple lines of business, which means they have lots of execs who are really great.

Great execs can come from acquisitions. Think of David Marcus or Hugo Barra. I really think if you're going to be a generational company, you need to be thinking about merging with competitors earlier.

What did you learn at Uber about making build, buy, or partner decisions? What are some things to consider when navigating your choices?

Emil: Uber was definitely more of a build company: Uber Eats, self-driving cars, that sort of thing. We made some smart acquisitions, but mostly, we built it in-house. When I think about our history here, it’s a mixed bag.

One of the reasons it would have been right to acquire Lyft was because their customers didn't overlap with ours for a long time. Lyft appealed to their customers because they had a unique brand. It was playful. It was different. It was lightweight. We were still known for black car at this time.

Generally, it's just hard to have a one size fits all approach on this.

When you're doing the build vs buy vs partner analysis, you always need to be realistic. It could be theoretically true that you could build that thing in six months with ten engineers – but it could also be the case that your main business needs all the engineers it can get.

In reality, can you actually build this thing in six months? What happens if you don’t? Have you lost market share because it's going to take you a year longer to go to market? How much is that worth?

You have to think through those factors, because if you’re pursuing an acquisition and it falls through, you need to make sure you’ve got a plan in place.

On Deck is launching the On Deck Business Development Fellowship: a continuous community for BD leaders who want to accelerate business growth through strategic partnerships and level up their careers alongside a highly-curated network of peers.

Partnerships can be a powerful growth lever for startups. In this post, Cristina Cordova (ex-Stripe, Notion) shares her insights on identifying partnership opportunities, different types of partnerships, and how startups can successfully negotiate with larger organizations.