Announcing: On Deck is officially expanding to Israel 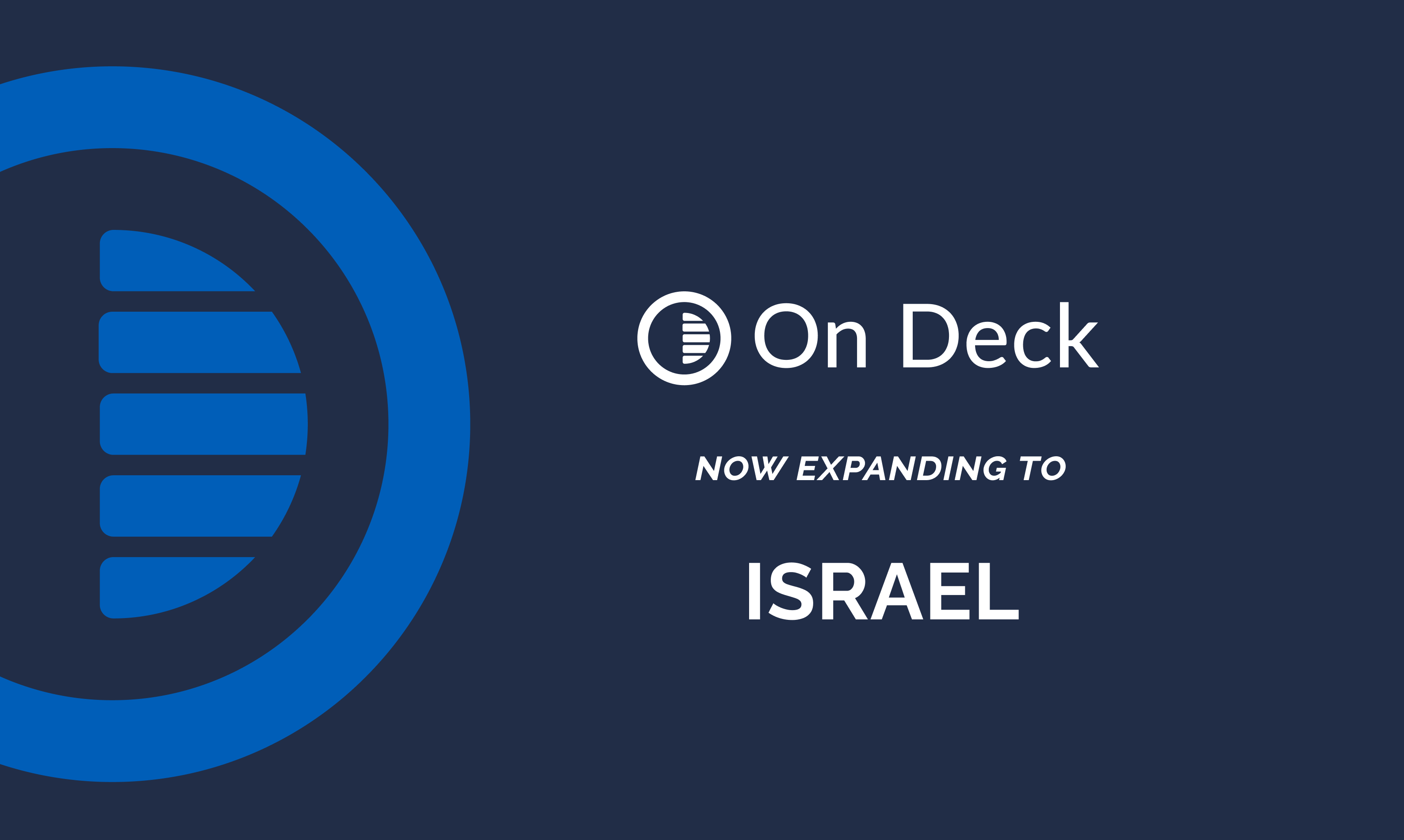 It’s no secret that Israel is a global hub for technology. The country has more technology start-ups per capita than anywhere else in the world and is second only to the US in venture capital funds. This is an impressive feat for any state, but even more so for a country that is only 70 years old, and home to just over nine million people.

Despite its relatively small population, the ‘start-up nation’ has produced hundreds of tech developments; everyday items like USB drives to futuristic medical devices offering real-time diagnoses originated in Israel, and groundbreaking products and initiatives continue to emerge at breakneck speeds.

The Israeli tech ecosystem is uniquely positioned to help address the world's current challenges. Its entrepreneurial spirit and software deep-tech focus, combined with the multidisciplinary approach of Israeli tech experts, put the ecosystem in a prime position to create breakthrough technologies and build scalable businesses. To put it simply: Connecting Israeli founders to a truly global community of founders, thinkers, multinational businesses and innovators such as On Deck's will be highly impactful - not just locally, but on a global scale.

Israel's track record speaks for itself: Companies like Waze, Mobileye, Monday, Wix, Fiverr and other influential players have all come out of it. We’re looking forward to supporting the Israeli founders, entrepreneurs, creators, and leaders who will be next on that list.

As COVID shifts Silicon Valley to the cloud, a new, urgent opportunity has emerged for Israel’s tech ecosystem to play an even bigger role in building the future.

The number of Israeli second-time founders and experienced employees has grown significantly in the past few years. We saw first-hand how incredible the talent in Israel is with our early On Deck Fellows who joined previous cohorts.

On Deck's global network offers a unique opportunity to connect Israel to the rest of the world in meaningful, productive ways. We are excited to bring Israeli fellows to our community and have them join the same programs as fellows in San Francisco, Toronto, London, and Singapore.

What does this mean?

We're building a first cohort of select Israeli fellows to join our global On Deck Founders program, kicking off on June 12th. This will be a group of repeat founders, former company executives, and highly talented individuals who are all working on their next thing.

We are also ecstatic to have Omer Kalderon leading our Israeli launch. Omer is a community veteran, with 10+ years under his belt in building and growing communities around products and causes. Before joining On Deck as Country Manager for Israel, he worked in 2 startups as the VP of marketing, co-founded Midburn community (the Israeli Burning man), and worked in the hospitality sector at Selina, as their VP of Guest Experience. Finally, last year he co-founded the White Elephant, a hub for social innovation, education and art in the Central bus station in the south part of Tel Aviv, with the mission to incorporate underprivileged communities of refugees and new immigrants into the Israeli society. He is an On Deck Founders alum (ODF6), and we can’t wait to see what he builds for our Israeli community.

We can’t wait to meet our next generation of leaders coming out of the startup nation. The Inaugural Israeli Cohort kicks off on June 12th as part of ODF10. You can apply here before May 11. Applications will be reviewed on a rolling basis.

A great operating model helps leaders turn strategy into results. Josefin Graebe (AppFolio, ex-Uber, Lime) lays out a set of principles for designing operating models based on her time as a Chief of Staff at some of the world's fastest growing companies.