Ben Braverman, managing partner and former CRO at Flexport, shares his experiences as a sales leader and tips for how to prepare yourself to scale during hypergrowth. 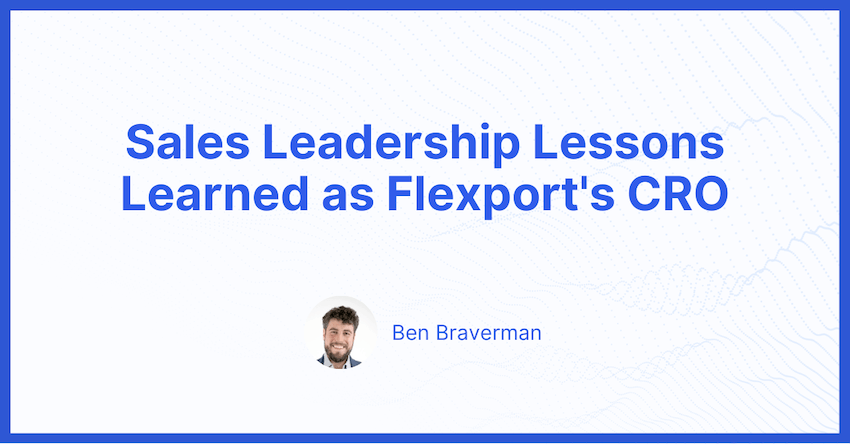 Ben Braverman is a co-founder and managing partner at Flexport Fund, a platform for global logistics. Prior to serving as managing partner, he was their Chief Customer Officer for two years and their Chief Revenue Officer for six years. In this post, he shares his best practices for becoming a sales leader in your organization, and approaching your job during periods of hypergrowth.

How did you philosophically approach your job as Chief Revenue Officer?

Ben: I think so much of being a human and being a sales leader is that you don’t actually know what the right thing to do is all of the time. You have hunches and you try to look at data and understand your options, but ultimately, in every decision, you just have to try to optimize for the company’s outcomes. You have to trust that you’re going to see wonderful outcomes if you do this with some level of consistency.

I think there’s a similar lesson to be learned from Buddhism and meditation. In the best moments, you’re just trying in earnest to do well. You’ve given the team a clear message — a mantra, if you will — and you just show up every day and repeat the mantra. You execute against the plan you put in place and hopefully you feel relative peace with the topic because you’re executing it in good faith.

How did you make an impact in your first year at Flexport?

Ben: It’s important to remember that there is no linear path in being a first-time executive, especially in a hypergrowth company. I would say that in the beginning, my path was very traditional in the sense that I sold a lot of stuff — that is always going to be the fundamental element of what you’re trying to accomplish as a sales leader. Your job is to push this to its absolute limit without the operations and product teams breaking and losing the ability to serve the customers you’ve onboarded.

At a certain scale, you’re operating a giant machine, but at every level of the game, you are essentially just trying to move as much product into your customer’s hands as humanly possible, and delight them in the process.

You cannot forget that your job is to be a salesperson. My first year at Flexport, I sold a lot of software and helped figure out what our product should be, defined the early playbook for how other salespeople would sell it later. That’s how I earned the trust of the CEO.

We also brought in some really special people who were well aligned with the mission and the idea that we could be one of the most important companies in the world. Together, we figured out what the customer wanted, how the customer wanted to be spoken to. We wrote it all down and built a code of conduct, a culture, and an ethos that scaled with us. In the end, the Flexport sales process hasn’t had to change or evolve much until the last 1-2 years. COVID and the supply chain crisis could have totally changed the way we go to market, but ultimately the strategy and playbook that we figured out in those early months ended up being pretty durable.

When was it time to hire your replacement for Chief Revenue Officer?

Ben: In my mind, I was often thinking: “Am I in over my head? Do I need a boss? Should I bring in someone who can help me as a right hand?” We put together a playbook for hiring in the first 1-2 years that was pretty durable and bought us a lot of headway. I interviewed maybe 100+ VPs of Sales and CROs along the way.

Not everything I learned from these people was the right thing to do, but synthesizing the learnings of a hundred VPs of Sales, CROs, and Marketing VPs was helpful. It took me a year and a half to hire a Head of Inside Sales/SDR. We interviewed about forty-five people for that role. Ask people: “How do you do your job? How do you define success in a given year? What are the processes you’ve put in place, and what are the experiments you’ve run that worked or didn’t work?” Write down their answers and eventually, you’ll get better at doing the job yourself.

Some of these people ended up coming to work for us. Most of them didn’t, but I learned more from interviewing them than I did doing anything else. In 2020, our revenue goals changed. We wanted to become a world-class freight forwarder and an operationally world-class customs broker. We wanted to have a better cost of operating than our competitors and a higher NPS. We got to the stage where it made sense to bring someone in to replace me. I stepped down as CRO and Will Urban stepped in. Last year, he helped bring us from $200k in revenue to $1.3 billion.

What’s your advice on how to find a mentor to help you develop into a great sales leader?

Ben: Honestly, there’s no other way to get real mentorship for someone other than by working for them. Sure, you can have useful conversations and there are people who can share their wisdom with you. But the way you can learn from someone when you work for them and you’re learning how to execute their vision. When it’s the right vision and they know things about the world that you don’t, that’s a special position to be in.

If you feel like you need mentorship, there are two modes. You either don’t actually need a mentor, in which case you can hire a coach that’ll give you a pep talk once a month, or you actually need a mentor. If it’s the latter, I recommend going to work for someone that is a full degree further ahead of you in life, and listening a lot. That’s the way I’ve found the most useful mentorship.

Related Articles:
Guides
How to Lead a Growth Team in a Hypergrowth Company

In this Q&A, Morgan Brown (Shopify, ex-Facebook) shares his thoughts on how to successfully operate in the hypergrowth phase as the leader of a growth function.