Tyler Cowen, director of the fellowship program Emergent Ventures, shares his process for evaluating entrepreneurial talent that can bring on societal change. 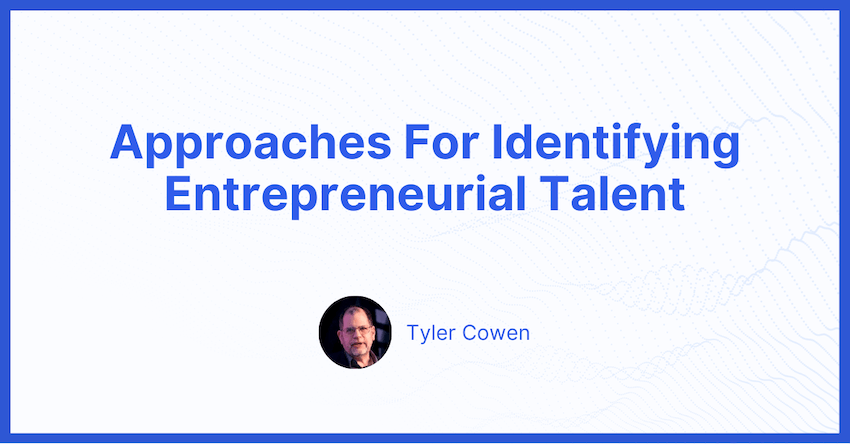 Tyler Cowen is an economist, author, and professor at George Mason University, where he serves as general director of the Mercatus Center and its grant program, Emergent Ventures. His work with Emergent Ventures seeks to fund entrepreneurs with innovative ideas for improving society. In this Q&A, Tyler shares how he thinks about and evaluates talent. This is an abridged summary of Tyler’s interview on Execs, our podcast where we interview executives from high-growth companies.

What’s your approach for identifying and funding entrepreneurial talent?

Tyler: What we do is very different from venture capital. We have over one hundred and seventy ventures that we’ve funded at Emergent Ventures, and only twenty of those are for-profits. I certainly hope those make a profit, but they’re also just idea-based projects.

I’m very open-minded about what we fund. At one end, we made a significant grant to Emily Oster for her data-driven studies of COVID-19 and when K-12 schools should reopen. She was famous to begin with and already had some money, but I thought what she was doing was important and needed to be done right then, not two months later. The notion that she would have to jump through hoops to get money just seemed obviously wrong to me. We were able to get her money in two or three days after what was basically a ten minute video call.

And then on the other end of the spectrum, I’ll get a fourteen- or fifteen-year-old who has a lot of promise but doesn’t have that background or experience, and we might fund them too. The most important thing for me is to stay open and aware of my own preconceptions, and willing to fight back against them, because I”m trying to support people who are working in a lot of different areas.

I’ve missed out on people who were brilliant but not credentialed — I undervalued a whole bunch of them. Some of my other missed opportunities were around people in the public policy arena who were writing about crypto very early in the game. We had a number of them at Emergent Ventures, but I would’ve done much more with that if I knew what I knew now about the industry.

I think my greatest strength is in evaluating idea-based projects. If I were just out to maximize profit, I’m not sure I’d be very good at it.

What is the most important thing you look for in the people you fund?

Tyler: I ignore stated motivations. They’re often sincere, but they're still kind of b.s. I look at which audiences a person is trying to impress and which hierarchies they’re embedded in.

If a talented person is embedded in the wrong hierarchy, like a gang, that’s not going to end well. The more talented that person is, the more they’ll succeed and rise to a top gang position. They’ll continue down that path instead of ending up disillusioned and leaving the gang altogether.

This is a real problem in societies that are not fundamentally healthy. Let’s say you were considering investing in someone in modern-day Russia and you were quite impressed with them. I still think you would be torn. This person is great at climbing the ladder in modern-day Russia. How do I feel about that? It’s tricky.

But if a person can pick out the right hierarchy to operate within, and if they’re climbing up the hierarchy in a useful way embedded in a society that’s more or less healthy, then I’m enthusiastic.

Your book highlights the importance of stamina — how do you judge stamina?

Tyler: Stamina is one of the hardest things to judge. In older people, you try your best with their track record along with reference checks and other obvious things.

These types of conversations can give me partial insight, but I'm not sure anyone is perfect at it. Maybe Peter Thiel would be the best, but it’s simply very hard to evaluate stamina in young people. Often, the people themselves don’t know. You do your best.

How does an entrepreneur’s age factor into your evaluations?

The average age of someone with a successful startup is older than some people think. One source says forty-five. I don’t know which population they’re measuring there, but successful founders aren’t always eighteen-year-olds wearing hoodies.

Obviously, with older people, you look more at track record, but there are outliers where track record is going to mislead you a bit. For example, I think Grandma Moses did most of her painting when she was well into her eighties, and she wasn’t famous before then. So you could look at her track record and say that she had no merit, but then you’d be missing out on Grandma Moses.

Often with late bloomers, they started something very early that maybe didn’t come to fruition. Many of them are women who had families, which is its own topic — one should be super alert for those. There’s a very large number of them and they’re awesome and you’re not going to find them in the traditional ways.

On the other hand, there are some fields — for example, chess or basketball — where there are just no late bloomers and I suspect there cannot be. Look at the NBA. You can’t pick up a ball for the first time at forty-five and expect to get drafted.