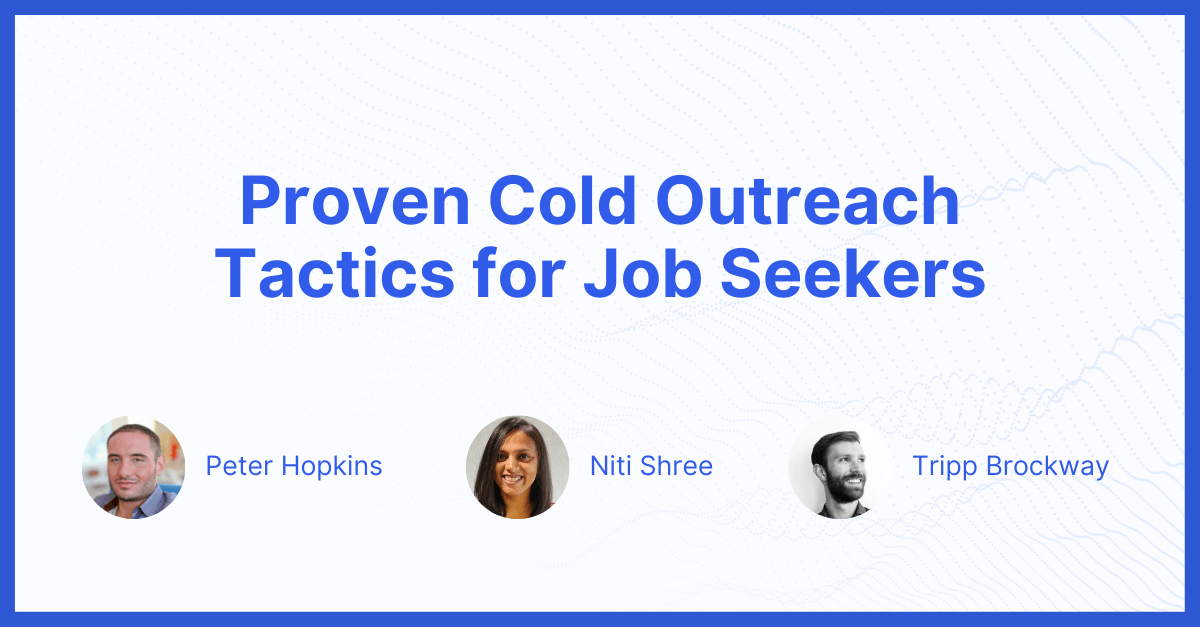 If you’re reading this post, it’s probably because you’ve been trying cold emailing and cold outreach, but aren’t getting responses.

When you’re looking for a job, sending cold outreach can cause a lot of anxiety. But it’s worth pushing through. Getting good at cold outreach is a career superpower, as it allows you to get opportunities outside of your current network.

This article features insights from the following speakers:

Niti Shree, Product Manager at Backstage.Army, who used cold emailing to transition her career into a different industries. While fundraising for her startup, Niti also used cold outreach to get responses from potential investors, including executives at Google and Pinterest.

This post will improve your cold outreach, providing tactical approaches that can get you closer to your next big role. It is an abridged summary of a session from On Deck First 50.

If you're going to reach out to someone cold, you can stand out by doing a little bit of extra work and personalizing your message. This is as simple as briefly checking their social media, or using their name in a clever way.

For example, when cold emailing someone about a potential job, Tripp noticed she had a lot of plants on her Instagram. His wife loves plants, so Tripp included pictures of their houseplants in his cold outreach, helping him get a response.

At most, take an hour to do your research per person, often less.

As a student, Niti was interested in a PR consultancy named Aim High Consulting. So she wrote an email with the subject line “Passionate individual wants to aim high.” Part of your job as someone sending a cold email is to get them curious enough to open the email, so they read the rest of it.

This shows that you cared enough to do research, and that your cold outreach was an intentional activity that you put thought into. This is also a chance to let your personality show; outreach can often feel templatized and spammy, and making it personal can help you increase the chances of a response.

That said, don’t overdo it. At most, take an hour to do your research per person, often less.

Get insights by putting yourself in the receivers’ shoes‍

Peter’s advice is to “follow the money.” What might be motivating the people who you’re reaching out to? Business people, the more senior they are, will oversee things like finances and P&L. At the very top, the CEO is thinking about things like threats and risks to the company. Understanding what they care about helps you craft the right message.

Timing also plays a big role, especially in reaching VIPs. Tripp had success reaching Bill Ackman, one of the world’s most famous hedge fund billionaires, by emailing him at 5am in the morning. Tripp imagined him as an early riser, spending mornings on his treadmill catching up on his emails in a luxury home overlooking Central Park. Whenever Tripp had to reach people like Bill, he would wake up at 5am to send his emails.

A common mistake is to send nine paragraphs detailing your entire background and why you're reaching out to them.

Your goal is to give the reader one thing they can latch on to start responding.

How long should cold emails be? The shorter, the better.

Peter’s personal rule of thumb is to keep his outreach a maximum of 150 words. Keep it to five sentences at most. That’s more than enough space to show your personality, show your reason for outreach and to give them a reason to respond.

Your goal is to give the reader one thing they can latch on to start responding.

As we’ve seen in the previous examples, this can be a suggestion you have to improve their business, a personal anecdote they can relate to or an interesting question they'll want to discuss further.

Think multi-channel to increase your chances‍

When most people think of “cold outreach” they just think of sending emails. But a lot of companies, especially larger ones, have aggressive email filters that prevent your cold email from reaching its destination.

Tripp recommends using LinkedIn and Twitter to increase your chances. The same rules about personalization and keeping it short apply.

An important step is to check whether they’re active on the platforms: Niti calls out that you can visit their profiles to see their recent activity. If they haven’t done anything in a year, then don’t bother.

That could lead to an increased chance of their opening your emails, or perhaps you’ll be able to slide into their DMs.

Have a single, clear call-to-action to move things forward‍

Many people fail with their cold outreach not because they can’t get people to click and open, but because there’s no next step. The last thing you want is for them to be confused about what to do with it.

Give them a clear next step, ask them for a response to something you mentioned, get on a short call sometime next week (offer availabilities!) or simply nudge them to push for a conversation with someone else in their organization. Sometimes just letting them know they can push your message to someone else in their workflow is all you need.

Peter advises to avoid beating around the bush and make your intentions clear, using a phrase like "I'd love to chat with somebody on your hiring and your recruiting team."

Plan for multiple messages, not just a single outreach‍

Cold outreach is often a sequence, not a one and done message. People are busy, and responding to your message might not be their top priority depending on when you catch them. This means you can’t give up just because your first outreach wasn’t successful.

Peter expects and plans for “two, three, potentially up to four emails” he really wants the person’s attention.

In our follow-up sequence, avoid using single sentences like "hi, just following up on this", "wanted to check if you got this message" or worse, “I guess you’re too busy to reply.”

The easiest way to do this is by adding value to every interaction you have. Peter’s approach is to “pre-program two or three insights” he already knows what he might say in his next messages.

Niti spaces her follow-ups between five to seven days. Unless the ask is urgent, this prevents you from looking too desperate or needy. It also shows that you care about having a conversation with them and are organized enough to follow up and reach out.

There's just one last piece of the puzzle, and it's your tonality.

A mistake that will sink your cold outreach, especially if you’re using it to look for your next job, is to come off as needy or desperate. Most people do this by putting the other person on a pedestal.

“Hey X, I'm on the job market. I love what y'all are doing. Here are a couple bullet points on where I think I can support objective Y using my skills Z. Do you have five minutes next week to catch up?"

The underlying message here: "I know I can provide value. Here's what that value is useful to you."

Niti sent a similar message when Lunchclub was expanding to India. Her message was along the lines of, "It's great to see an app like Lunchclub in India. I love networking, so here are some ideas on how Lunchclub can be better. Let’s discuss." This led to a call with the CEO.

Notice how those messages tie in everything we’ve covered: they’re short, they show personality, they show effort, and they have a clear call to action.

As a sales leader, cold outreach is part of Tripp’s DNA, and he shares what he thinks is the key to succeeding at cold outreach:

“The biggest thing to get your mind around is that you are likely to fail 80% of the time. Becoming comfortable with that, and expecting that four out of five people you reach out to won't respond, will help you set the right expectations so that you don't feel bad about yourself when you do it.”

Niti shares this sentiment. For her fundraising efforts, “only 40” out of 200 emails led to a response.

Perseverance in the face of rejection is perhaps the hardest part of cold outreach. But overcoming that hurdle can lead to it becoming your career superpower.

Instead of being limited by who you know and waiting for the next opportunity to present itself, cold outreach – especially one built on these fundamentals – will create openings that will accelerate your career.

On Deck is launching the On Deck First 50 Fellowship to help talented operators find their next role at a breakout company. The first cohort kicks off in January.

In this guide, Ming Lu (founder of Sensible) and Vik Duggal (founder of RevPipes) draw from their decades of experience navigating the startup landscape to detail how to choose the right stage startup to join, and why that decision should be anchored in an accurate assessment of your risk tolerance and career priorities.