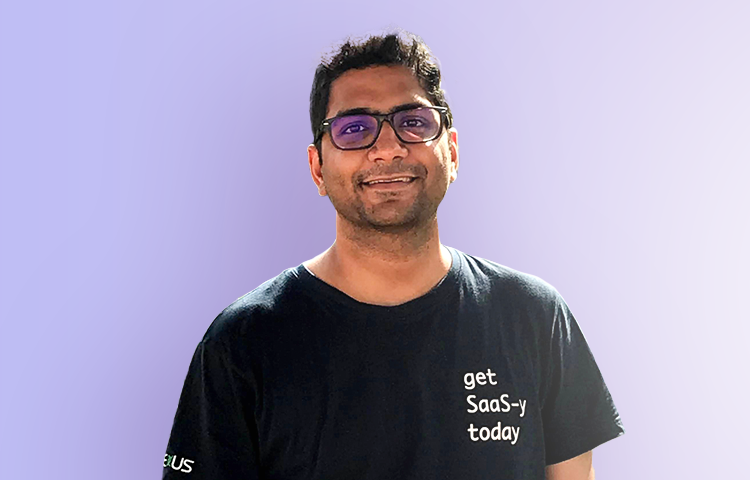 Sathya Viswanathan
Associate Director of Product Management (Workflow)
,
Kissflow
The post originally appeared on MikeWilner.com. It was republished with permission.

Sathya’s been working in product management for over a decade, helping to launch a number of successful SaaS products in India and the UK. These days, he’s based in Vancouver, Canada.

Sathya first heard about On Deck at a pivotal moment in his career.

I first heard about On Deck when I was a Product Manager overseeing several teams. I had over ten years of industry experience, but I felt that my career was coming to an inflection point.

I knew that I was due to be in a director-level position, and I was comfortable with what I did on a day-to-day basis. It would have been easy to stay in that comfort zone and just go through the motions, but I realized it was time to take a step back and think a little more deeply about my career and what I wanted next.

Introspection was called for in order to determine which skills I would need to develop to become a more impactful product leader and to not plateau.

I was still tempted to either join another startup or try to pursue my own venture. When a mentor involved in several VC funds suggested that I try On Deck, I was open to it and the timing could not have been more perfect.

The opportunity had recently come up for me to move to Canada, and my mentor recommended that regardless of what my next step would be, one of the best things I could do would be to develop a stronger network in North America. He reinforced that it was important at this stage to get exposure to a more global set of product leaders, thought leaders, and founders.

I already had credibility in India, was known to be a hard worker, and had exposure with product leaders and founders there. I also fully knew how to build a SaaS business in India, but I also knew that in North America there were different sets of constraints and challenges.

I was ready to try to learn how North American startups grow into successful companies.

Sathya was working around the clock, juggling his day job and On Deck. It was intense, but it was worth it.

When I joined On Deck, it was an intense experience for me because I was trying to get the most out of it. It was a twelve week program (although I know it’s now a continuous experience), and through those twelve weeks, I was managing a team of twelve, and had work from morning to evening.

Just as I’d wrap up my regular workday, my On Deck day would start.‍

What struck me about On Deck was that it emphasized vulnerability, groundedness, and humility.

That made a huge difference to the quality of the interactions that I had. I didn't believe it was possible to even experience that remotely, especially with people you hadn’t met before. With all the connections I made, I would also fairly diligently set up one-on-ones. People were open and spoke to their weaknesses without really putting up a facade. They spoke to the challenges that they faced and were very available. That was amazing because it was much easier to build relationships from that base.

Building a more global network, right from your desk.

For me, On Deck was immediately a revelation for several reasons.

I was on a mission: I wanted to build a more global network and get in touch with more product peers. Being motivated, I attended all the sessions and all of the workshops.

I also was very diligent about the connections and relationships side of it.

Because I was so serious about all of the one-on-ones I was doing, fast forward to today, more than five or six months after the program, there are at least fifteen product managers around the world that I do one monthly catch-ups with.

That’s at least fifteen people that I have meaningful, long-term relationships with.

On Deck wasn't like speed dating for networking–it was much deeper than that.

We do monthly catch-ups, and sometimes it does boil down to product management therapy (you know how that is).

The nitty gritty of how ODPM changed Sathya’s career.

I attended every event, and the workshops emerged as my favorite. They were structured, planned, and went deep.

CHECK OUT OUR WORKSHOP

I started to see patterns in the areas that I would need to upskill on if I wanted to become a VP of Product or a Head of Product or a CPO, three or four years down the line.

Immediately following On Deck, I went back, signed up for courses and programs that allowed me to dive deeper into those areas. Without On Deck, I don’t think I would have known where I needed to focus on to grow.

On how upskilling led to a promotion to a director-level role.

I was made Associate Director at Kissflow about a month after On Deck.

I currently lead Kissflow's highest revenue product. I was also asked shortly after my promotion to define the annual product strategy for the company.

On Deck helped with articulating that in great detail and also with getting alignment from all key stakeholders in the company, including from the Head of Marketing, the Head of Sales and C-suite executives.

Defining our annual strategic roadmap and case flow helped at an inflection point for the company.

On Deck wasn’t just sending us through the motions, it really pushed us to think deeply. Even though there was such high visibility with Kissflow’s main product, and so many stakeholders, I was able to be far more structured and thoughtful in my articulation. I felt confident enough to explain the how and why behind each necessary prioritization in a much, much, more scientific way. That’s thanks to what I was exposed to from On Deck.

Getting that buy-in from all of the cross-functional stakeholders has been made so much easier and more fluid because of that focus.

I think the best candidate for the On Deck fellowship is not people with one or two years of experience, or people who've just come to product management.

It’s really for people who are at the mid-management level, or transitioning into mid or senior management, with at least four or five years experience in product management.

On Deck is ideal for people who are at that mid to senior level and looking to make the transition. People who are asking questions like, “What does it mean for me to become a more strategic product leader as opposed to someone who's just mastered the execution cadence?”

There was one really excellent workshop on product strategy that I recall was extremely well-planned and very well-structured. I had an epiphany and after that, I was able to go back and look at things at my company from the vantage point of ten feet above, or from a slightly higher level anyway. It was something that I was able to go back and listen to and say, “Okay, these are the areas that I need to work on and that I need to double click on.”

Compared to other programs I have experienced in the past, On Deck was unique because of the intimate nature of the community and the careful curation of participants. It was the only community with which I was able to build so many close relationships with people that I still speak with on a regular basis. It’s tailored for building those close relationships.

Putting in the elbow grease to make the most of your experience.

You get as much as you put into it, it's not a program where you’re going to just sit.

My advice to anyone looking to do On Deck, is whatever the duration, stay committed to the program and really push through it. If you do, I think you’ll really get returns, but it helps to have a clear plan and to not approach it passively.

I was moving to Canada, I wanted to build a global leadership base, I was considering launching a startup, raising money, and so on.

The second thing would be to not just treat On Deck as something that you do only within the duration of the program. I've said this already but, you can have one-on-ones with a number of people, but it’s best to come to it with the intention of, “How can I build long-term relationships with ten or fifteen people, away from this forum?”

Focus your interactions around really building a longer-term relationship with people. If we say this is just a program for people who want to network within their field, it has this connotation of, “What do I get out of it?” It should be about building professional relationships with people you can ask advice from. In other words, less about moving up and down, more of a focus on acquiring knowledge.

The more open you are with sharing whatever you know and being vulnerable about your situation and position, the more you’re going to get back.

It’s going to shed light on the areas of your career that you really need to upskill on, and what you can go back and double click on later. This requires a certain degree of maturity, which is why I suggested the program was best for mid to higher level product managers.

It’s also about building meaningful relationships with product managers and longer term relationships with a global network of peers. It’s not for people who just think, “I want to move up”  but who are passionate about knowledge sharing.

You can get a great talented group of people that you can help and that can help you.